The No7 seed Adrian Lewis, a former PDC world champion, was dumped out by the qualifier Kevin Münch in the latest first-round shock at this year’s tournament.

Münch had never won a match at the world championships – progressing only in 2012 when Denis Ovens retired – while Lewis had never lost in the first round, but the German found a remarkable run of form to prevail by three sets to one.

Lewis looked in control after winning the first set and going 2-0 up in the second, but Münch, who beat Russia’s Aleksandr Oreshkin in the preliminary round, broke back at 2-1 down and closed out the second set after racing ahead in the final leg. 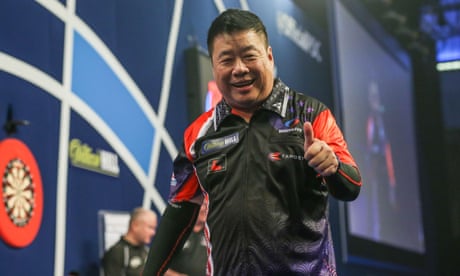 Münch opened the third set with six perfect darts, and took out double top to break Lewis again. The qualifier then hit two consecutive three-figure checkouts – 158 and 118 – to take the set. The 29-year-old continued his hot streak in the fourth, checking out from 124 and closing out the final leg on his own throw to seal the biggest upset so far at this year’s tournament.

Lewis, who won the tournament in 2011 and 2012, faces the prospect of dropping out of the world’s top 16 and joins Dave Chisnall, James Wade and Jelle Klaasen in making an early exit. Münch’s victory comes the day after 63-year-old qualifier Paul Lim eliminated Mark Webster.

“It feels so amazing, I’m over the moon,” Münch told the PDC’s official channel. “I was so confident at the key moments, I played my game and not Adrian’s. Time to relax, practice and get ready for the second round.”

Things were much more straightforward for another former champion, Raymond van Barneveld, who comfortably defeated the debutant Richard North. The Dutchman had not dropped a set in the first round since the 2012 tournament, and maintained that streak with a 3-0 win. North could not compete with Van Barneveld’s 102 average and could not take opportunities when they came along, hitting three of 13 shots at a double.

“Richard is a great player, I really thought he could be dangerous,” Van Barneveld said afterwards. “This tournament is special to me, so maybe I keep my form and energy for these two weeks.”

Scotland’s John Henderson eased past Finland’s Marko Kantele by a 3-0 scoreline in Tuesday’s other game. Michael Smith and Simon Whitlock are in first-round action on Wednesday.