Brandi Glanville is leaving little to the imagination when it comes to her relationship with her new man, Donald “DJ” Friese.

The former Real Housewives of Beverly Hills star posed completely nude in an NSFW photo her beau posted on Instagram Monday. In it, the couple is laying on a bed with no clothes on as their shadows and limbs are careful not to expose too much (other than some side-boob and a little bit of booty).

We can see Friese gripping Glanville’s bare behind as his head pokes up over her shoulder. Most of her face is hidden by her arm. 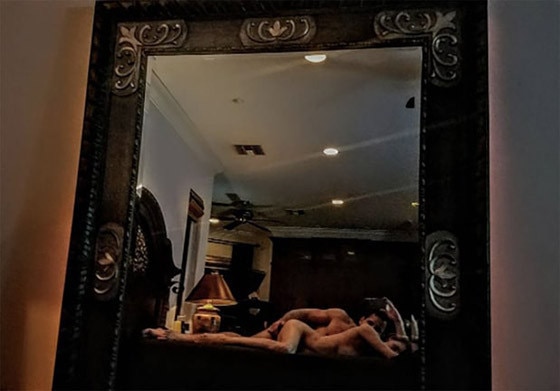 Though Glanville didn’t share the nude photo, she did take to her own social media account to shout out to her man. Sharing a more, er, covered-up version of the pic, the reality star sits beside Friese on the same bed, wearing a plunging pink dress as she cuddles up close to him and rests her hand between his legs. Friese wears a dark suit and smirks while snapping the mirror selfie.

Meanwhile, the couple made their red carpet debut earlier this month, making things official after dating for five months.

They met on Tinder, and though she’s dated casually here and there, this marks Glanville’s first real relationship following her divorce from Eddie Cibrian in 2010.