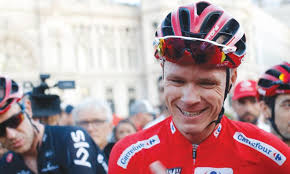 Chris Froome’s adverse drugs test is “a disaster” for cycling that could lose Team Sky all its credibility, says the ex-head of the sport’s governing body.

Pat McQuaid, president of the UCI for eight years, told BBC Sport it is “a huge shock… troubling and worrying”.

Froome had double the permitted level of legal asthma drug salbutamol in his urine in his 2017 Vuelta a Espana win.

He has not been suspended, but if he fails to explain the result, he could be stripped of the title and banned.

Four-time Tour de France winner Froome said: “I know exactly what the rules are. My asthma got worse at the Vuelta so I followed the doctor’s advice to increase my salbutamol dosage. I took the greatest care to ensure I did not use more than the permissible dose.”

However McQuaid added: “I don’t see how Chris Froome can turn around like he did and say ‘I played by the rules, I broke no rules’.

“The fact is, he has broken a rule. The fact is his urine sample was twice the permitted limit. It’s up to him to go and prove that he could have done otherwise.

“We’re now three months down the road, and they haven’t found a solution or a resolution to it yet.”

In a statement earlier this week, Sky team principal Sir Dave Brailsford said: “There are complex medical and physiological issues which affect the metabolism and excretion of salbutamol… I have the utmost confidence that Chris followed the medical guidance in managing his asthma symptoms, staying within the permissible dose for salbutamol.”

But McQuaid believes the news surrounding their star rider will further damage the reputation of Team Sky.

Earlier this year, the team were investigated over the ‘mystery’ medical package delivered to Sir Bradley Wiggins at the Criterium du Dauphine in 2011 – although they were not charged – while Josh Edmondson says he secretly injected himself with a cocktail of vitamins during his time with Sky.

McQuaid added: “They’ve had a very difficult 15 months, when they set out to be the team that is the clean team, that was going to bring back the credibility of cycling and they certainly have gone in the opposite direction this year.

“They haven’t achieved what they set out to achieve. They are a team with by far the biggest budget in cycling and they can afford all of the experts and all of the medical back-up and all of the things that a lot of teams can’t afford and they find themselves in this situation today.

“It’s going to be very difficult to see how they can come out of this with any credibility at all to be honest with you. It begs a lot of questions.”

McQuaid lost the acrimonious 2013 UCI presidential election to bitter rival and former British Cycling chief Brian Cookson, who was at the helm at the time of Froome’s abnormal drugs test on 7 September before being replaced as president himself two weeks later.

McQuaid believes Cookson would “absolutely” have been told about the case.

“If a result comes through from the laboratory that a big, big rider has provided an adverse analytical sample then the president is involved, so he would have been aware,” said McQuaid.

Last week Cookson praised Team Sky, telling the BBC their reputation should be “reinstated” despite this year’s issues.

“It really surprised me what Brian said about Sky getting their credibility back when all the time he knew that this thing was going on in the background,” said McQuaid.

“How Brian, knowing all of those facts, could turn around and say, ‘you need to hand their credibility back to Team Sky’, I just don’t understand it, it’s beyond me.”

When asked by BBC Sport if he was made aware of Froome’s adverse test while he was UCI president, Cookson denied he had any “role or influence”in the case.

McQuaid was among those heavily criticised in a landmark report published in 2015 into the sport’s troubled recent history, while Cookson questioned the Irishman’s handling of the Lance Armstrong scandal.