LOS ANGELES — In late 2016, when the sexual assault allegations engulfing USA Gymnastics and former team doctor Larry Nassar made national news, attorneys for the governing body of the sport and one of its biggest stars, McKayla Maroney, struck a deal to keep any mention of her abuse by Nassar out of the public eye.

That revelation comes from Maroney’s attorney, John Manly, who filed a lawsuit Wednesday in Los Angeles County Superior Court on behalf of the former Olympic gymnast.

“They were willing to engage in a systematic cover-up of the entire matter,” Manly said Wednesday when asked about the confidentiality agreement.

In late 2016, USA Gymnastics paid Maroney to sign the confidentiality agreement, Manly said, effectively buying the silence of one of the sport’s most recognizable Olympians. Manly would not disclose the amount, but The Wall Street Journal reported that Maroney was paid $1.25 million.

Maroney willingly entered into the agreement, Manly said, but did so at a time when she was emotionally traumatized by the emerging news that Nassar had sexually abused dozens of other women under the guise of medical treatment.

“I want people to understand that this kid had no choice. She couldn’t function. She couldn’t work,” Manly said. “They [USAG] were willing to sacrifice the health and well-being of one of the most famous gymnasts in the world because they didn’t want the world to know they were protecting a pedophile doctor.”

Manly was not part of the negotiations between Maroney and USA Gymnastics that led to the confidentiality agreement.

Maroney violated the terms of her confidentiality agreement in October, Manly said, when she publicly revealed, first on Twitter, that she had been abused by Nassar.

“In 2016, McKayla’s attorney at the time, Gloria Allred, approached USA Gymnastics, requesting that the organization participate in a confidential mediation process,” the statement said. “USA Gymnastics cannot speak to the mediation process, which is confidential and privileged under California law. The process culminated in a settlement agreement that included a mutual non-disclosure clause and a mutual non-disparagement clause.”

“People need to understand the courage it took to put out that Twitter post. She not only was exposing her humiliating story, but she was also putting herself at legal risk,” Manly said, adding that he thinks the chances of a successful countersuit are remote.

“Confidentiality agreements in child sex abuse cases are unlawful in the state of California and have been for years,” Manly said. “We’re basically saying USAG and its lawyers violated the law by asking McKayla to agree to it and that she should be free to talk about her abuse to whomever she wants, whenever she wants.”

USA Gymnastics said in its Wednesday statement: “The settlement in 2016 was in accordance with state law, despite what has been alleged. At all times, McKayla was represented by Allred, a California-based attorney, who actively negotiated and approved the settlement agreement signed by McKayla.”

Last month, in two separate hearings in Michigan, Nassar pleaded guilty to a total of 10 counts of criminal sexual conduct. His sentencing on seven of those counts is scheduled for Jan. 16, and the judge in that case has set aside four days for women who have accused Nassar of abuse to address the court.

While Maroney has not commented publicly since her October Twitter post, she and her mother, Erin Maroney, submitted victim-impact statements earlier this month to the federal judge presiding over Nassar’s sentencing hearing on child pornography charges.

One of the more disturbing incidents described in the letters by Maroney and her mother occurred when Maroney, then 15 years old, competed in the 2011 world championships in Tokyo.

“[Nassar] had given me a sleeping pill for the flight, and the next thing I know, I was all alone with him in his hotel room getting treatment,” McKayla Maroney wrote.

Erin Maroney detailed the same incident in her letter to the federal court.

“[Nassar] drugged her, made her lay nude on a treatment table, straddled her and digitally penetrated her while rubbing his erect penis against her,” Erin Maroney wrote. “She was only 15 years old. She said to me, ‘Mom, I thought I was going to die.’ 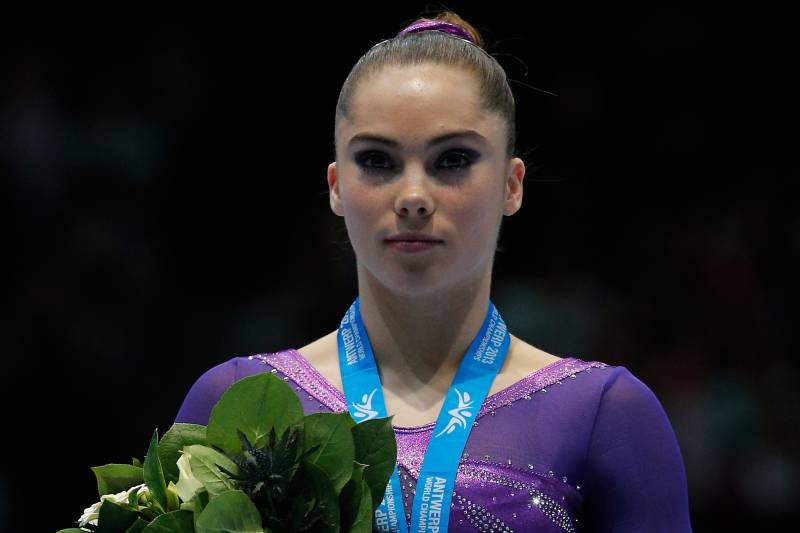 “This experience has shattered McKayla. She has transformed from a bubbly, positive, loving, world-class athlete into a young adult who was deeply depressed, at times suicidal. At times, I was unsure whether I would open her bedroom door and find her dead.”

Nassar, 54, was sentenced to 60 years in prison on the child pornography charges. Maroney attended Nassar’s federal sentencing in Grand Rapids, Michigan, but did not speak with reporters.

Maroney, Aly Raisman and Gabby Douglas — teammates on the “Fierce Five,” the gold-medal-winning team from the 2012 London Olympics — have all publicly accused Nassar of sexually assaulting them during medical exams. Maroney is the first of the three to file a lawsuit.

Using an ungloved hand, with no other adult present and without the consent of Maroney’s parents, Nassar first digitally penetrated Maroney when she was 13 in her dorm room at the Karolyi Ranch — USA Gymnastics’ national team training center run by former Team USA coaches Bela and Marta Karolyi — according to the lawsuit.

Maroney’s lawsuit alleges that Nassar continued to abuse her on dozens of occasions for nearly five years on three different continents.

“In addition to the sexual acts … Nassar would continuously, obsessively and compulsively photograph McKayla Maroney,” the lawsuit states. “Maroney alleges that she believes photographs were taken of her while Nassar was sexually abusing her under the guise of treatment.”

In her recent letter to the federal judge, Erin Maroney asked: “Did [Nassar] trade those images with other pedophiles? Are those images on the dark web today? Will she wake up one day to find an image of her 13-year-old self being assaulted on the internet? This is what our family must live with and it will never go away.”