Saracens suffered their seventh straight defeat as they lost to Clermont in the Champions Cup for the second time in a week.

The defending champions, who fell to a humiliating 46-14 defeat at Allianz Park on Monday, led 13-0 through Owen Farrell’s kicks and a Ben Spencer try.

But their indiscipline proved costly as Clermont trailed by one at half-time.

Saracens began the day four points behind pool leaders Clermont and on their worst run for 14 years.

The champions of Europe had suffered six consecutive losses before Sunday’s game – including the record home European defeat by their French opponents on Monday – and fell to yet another defeat on Sunday.

Despite a much-improved performance in France and a hard-fought losing bonus point, Mark McCall’s side are now third in their pool, two points behind Ospreys, who beat bottom side Northampton 32-15, and talks of a crisis at the club will still be lingering.

They need two wins from their final two matches to give themselves a chance of advancing to the quarter-finals.

Saracens’ defence was way off the mark on Monday in London, missing 37 tackles.

Led by captain Farrell, they looked better organised in France, but were penalised consistently and were fortunate to only see two players sent to the bin.

Sean Maitland conceded the first penalty after tackling Isaia Toeava in the air, but the Scot was fortunate referee Andrew Brace chose not to show a yellow card.

It was a testing afternoon for Irish referee Brace, who appeared to send Clermont’s Nick Abendanon to the sin-bin late into the second half for a similar incident.

Despite their indiscipline, the visitors were the more fluid side in attack and built up a healthy 13-0 lead after 10 minutes – Farrell struck twice before scrum-half Ben Spencer accelerated away from the ruck to complete the dream start.

But the visitors failed to push on and penalties at the breakdown allowed Clermont scrum-half Parra to chip away at deficit.

The home side never looked like producing the six tries they offered on Monday, and were forced into a reshuffle when both winger Alivereti Raka and centre Damian Penaud limped off.

But Saracens continued to leak penalties and with Will Skelton in the bin for persistent infringing, Parra added a third penalty before a first long-range effort from Spedding all but eclipsed the visitors’ lead at the break.

Having fallen behind to two further penalties from Parra, Saracens offered a brief resurgence on the hour mark as Abendanon was sin-binned for bashing into George Kruis at the restart.

With the extra man, Lozowski cut back inside to put the champions back ahead but their hopes were dampened following a second yellow for Juan Figallo, who failed to roll away at the breakdown.

Their defence put in a monstrous shift with 14 men but after winning a penalty for a high tackle, Parra kicked them level before Spedding sailed one over from distance with a minute left.

Clermont remain unbeaten in this season’s competition and have a five-point lead at the top of their pool. 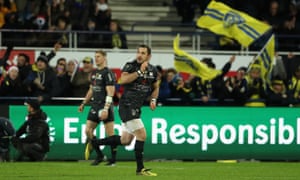