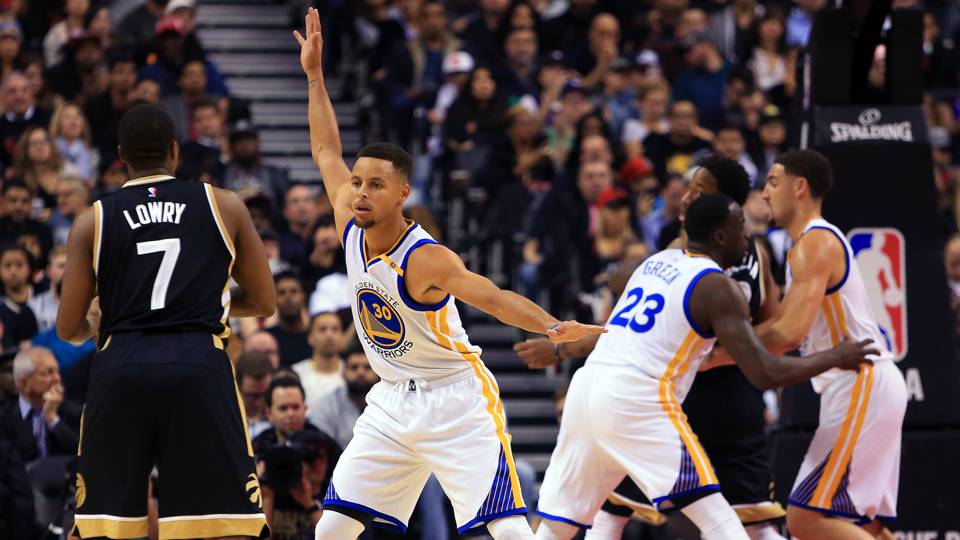 Very quietly, coach Steve Kerr has been espousing a theory as to why his Warriors — perhaps the most worried-over 11-2 team in league history — have not been up to snuff defensively this year. Yes, there is the usual spate of reasons, ranging from the loss of rim-protecting center Andrew Bogut, to the need for new guy Kevin Durant to play power forward more than ever, to the bench that had to be rebuilt this summer.

But Kerr meets questions about the Warriors’ defense, which has dipped from a rating of 100.9 (points allowed per 100 possessions, according toNBA.com/stats) last year to 105.6 this year, with a pretty even keel. Golden State’s D has gone from sixth to 20th, but the biggest culprit might be one that any other coach in the league would welcome: The Warriors’ offense is too good.

“We’re a different defensive team now that we’ve got a lot of new players, different personnel,” Kerr said. “KD is playing some four, which is a little foreign to him, he didn’t play a lot of four in Oklahoma City. We’ve got some new people, new combinations, and I think the biggest challenge really for our guys is to keep the intensity for 48 minutes. They tend to feel like they can outscore people, which they can, but it’s not a very good recipe for success against good teams and in the playoffs. We’ve got to get better defensively, and we know that.”

There is evidence suggesting that the Warriors’ defense is not in as rough shape as has been suggested. In first halves of games, it has even been pretty good. The Warriors yield 103.1 points per 100 possessions in the first quarter of their games, 12th in the league. In the second quarter, that gets down to 98.9, seventh in the league.

Golden State’s defensive numbers fall apart in the fourth quarter, when the team often has a sizable lead and is playing its reserves. Their rating is 117.2 in the fourth, easily the worst in the league.

This isn’t to say the Warriors don’t have a defensive concern. Losing Bogut surely hurts the middle of the Warriors’ defense, which ranked 11th in the league in defending shots within five feet of the baskets (opponents made 57.7 percent last year). They’ve dropped to 24th this year, allowing 60.2 percent shooting at the rim.

Free-agent signee Zaza Pachulia has not proven to be an effective Bogut replacement. The team hopes rookie center Damian Jones, recovering from a pectoral tear, can develop quickly into an interior defensive presence—the Warriors’ coaching staff privately expects Jones to be a contributor by the season’s stretch run.

But they don’t always do it, and that is a function of a high-expectations team easing into the season. It’s also a function of a team that is already staking a claim as the greatest offense team of all time. The Warriors’ offensive rating is 116.6, a full point ahead of the 1986-87 Lakers, who hold the record for most efficient offense of all time.

The Warriors’ effective field-goal percentage, which adjusts for 3-point shots, is .564, the best in league history. They are averaging 30.8 assists, third all-time.

“We go over our offensive stuff a lot,” Kerr said, “but to be honest, I could roll the ball out and we’re going to score a lot of points because our guys are skilled and talented. So our focus is taking care of the ball. The best thing for your defense is good offense. That’s where it starts. If you score and don’t turn the ball over, it’s an immense help to your defense.”

Their defense, though, isn’t all that bad. It will get better. If it has lagged, it’s not because Golden State doesn’t have the ability to be a Top 10 defensive team. This start is the result, above all else, of an offense that blows other teams off the court early and efficiently.