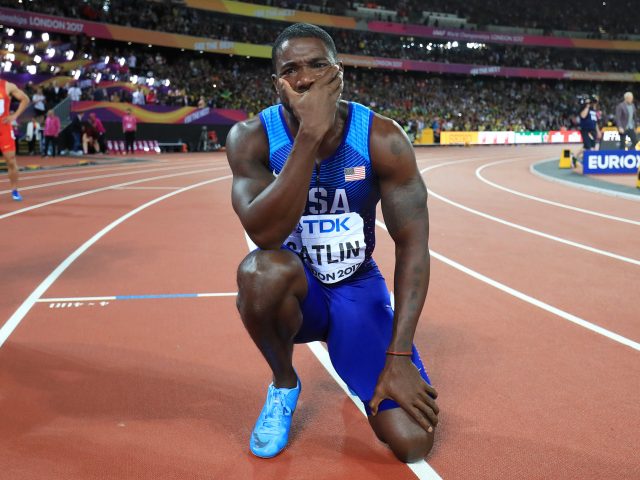 Justin Gatlin has denied he is using banned drugs and plans to take legal action against a newspaper that claimed he was embroiled in a doping scandal.

The 35-year-old American, who won the 100m world title in London last summer, spoke out after his coach, Dennis Mitchell, and an athletics agent, Robert Wagner, offered to supply performance-enhancing drugs (PEDs) for a fake actor in an undercover operation conducted by the Daily Telegraph. Mitchell and Wagner have denied wrongdoing but a “shocked” Gatlin has already sacked his coach in order to protect his reputation. 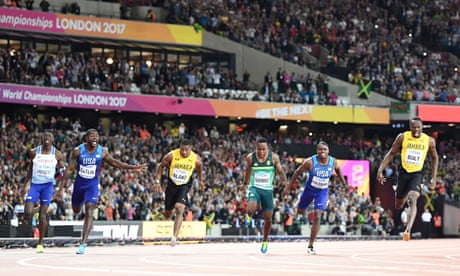 When Usain Bolt lost his final race: ‘It felt like we’d all done something wrong’

Gatlin said in a statement on Tuesday: “I am not using and have not used PEDs. I was shocked and surprised to learn that my coach would have anything to do with even the appearance of these current accusations. I fired him as soon as I found out about this.”

The American also warned that he was consulting his lawyers about suing for defamation. “All legal options are on the table as I will not allow others to lie about me like this,” he added. “I have no further comments as it is now a legal matter. They will next hear from my lawyer.”

When undercover reporters visited Gatlin’s Florida training camp they claimed Mitchell and Wagner offered to supply and administer testosterone and human growth hormone in exchange for £250,000. The two were also secretly recorded claiming the use of banned drugs was still widespread in athletics.

However, the Guardian has contacted a number of people in US track and field, including those who were in the room with the Telegraph, who insist that Mitchell made it clear none of his athletes used performance-enhancing drugs.

Wagner has insisted the story is “deeply flawed” because it is based on false comments he made up to impress people he thought were in the film business. “It was just big talk – I did not actually source or supply the substances the reporters asked for but stupidly claimed I could,” the US-based Austrian told the Press Association.

Gatlin, who has twice served doping bans, won 100m gold at the world championships in London last summer, beating Usain Bolt into third place. The American’s long-term agent Renaldo Nehemiah said Wagner had worked for Gatlin on no more than two or three occasions and the sprinter was not present when banned substances were discussed with either the agent or coach. Speaking to the Guardian, Nehemiah said: “This is both bizarre and ridiculous. It is a desperate attempt to further hurt Justin.”

The United States Anti-Doping Agency and the Athletics Integrity Unit, the new body set up by athletics’ world governing body, the IAAF, to oversee all anti-doping matters in the sport, are investigating the allegations. Usada said in a statement: “Importantly, individuals are innocent unless and until the established process determines otherwise. It’s only fair to let due process occur before jumping to any conclusions.”

The former British sprinter Darren Campbell has also said Gatlin must be afforded due process but reiterated his support for life bans.

Campbell said: “We have to be careful at the moment because no one has been proven innocent or guilty of anything here. But any of these situations involving doping are why people call for zero tolerance, otherwise we just keep going round in circles.

“I have always wanted life bans but I also understand that people deserve second chances,” he added. “Every case needs to be judged on its merits because not everything deserves a life ban.”