Mercedes and Ferrari have unveiled their new cars for the 2018 Formula 1 season with high expectations of fighting again for the title.

Both have chosen to evolve last year’s designs and both spoke of maintaining their strengths while working on the weaknesses their cars showed.

Mercedes have aimed at widening the operating window of a car that they described as a “diva”.

Ferrari have worked on improving the car on faster tracks and reliability.

The Italian team’s title challenge faded last year partly owing to a run of poor reliability in the races in Malaysia and Japan in September and October.

Champions sticking with what they know

Mercedes ran their car at a frigid Silverstone on Thursday, with Valtteri Bottas doing a few laps in the morning and Lewis Hamilton taking over in the afternoon.

Team boss Toto Wolff said: “We’ve tried to stay true to our design philosophy and develop an already solid base.”

Wolff said the team had tried to keep the strengths of its overall pace as F1’s fastest car but iron out the flaws that made it uncompetitive at certain types of circuit, particularly slower tracks with low-grip surfaces.

“We hope we have kept the good character traits of the diva,” Wolff said. “We all like divas. But sometimes she was a bit difficult to understand and this is the are where we worked the most, trying to understand and preserve the speed in the car and find more driveability.

Hamilton said: “I am hopeful we have ironed out a lot of the creases. There is a different aerodynamic characteristic this year, there were certain circuits we were not as strong so hopefully we have found a compromise that suits all circuits. But everything is brand new. All the suspension and everything has been re-done, it is brand new.”

The 33-year-old Britain said he was “excited” to start the new season and go for a fifth world title.

Ferrari moving towards their rivals

Ferrari technical director Mattia Binotto said the team had further evolved its standard-setting approach to aerodynamic surfaces in front of the side pods – beside the driver – while working on the car’s performance on high-speed tracks, where Mercedes often dominated last season.

And the Italian team have moved in Mercedes’ direction by lengthening its wheelbase – which helps in producing more overall aerodynamic downforce.

“It is an evolution of last year’s car which was already a good project,” Binotto said. “We tried to maintain the strengths, aggressiveness of some of the design, and working well on low-speed circuits.

“But we also had to work on aerodynamic development to make it strong on high-speed circuits but as well on reliability.

“We have a slightly longer wheelbase, we have side pods and radiator ducts even more aggressive than last year – [bodywork] packaging is very tight. The body is very narrow.”

Ferrari’s number one driver Sebastian Vettel said: “This is a big step from last year’s car. Let’s see how it feels.”

Criticism of the ‘Halo’

Both cars look extremely elegant and nicely realised and on first impressions can be expected to be major contenders again this year.

They will begin pre-season testing proper at Spain’s Circuit de Barcelona-Catalunya from Monday next week.

Both feature the ‘halo’ head protection system that has to be fitted to all cars this season.

Wolff said he was not a fan of the device. 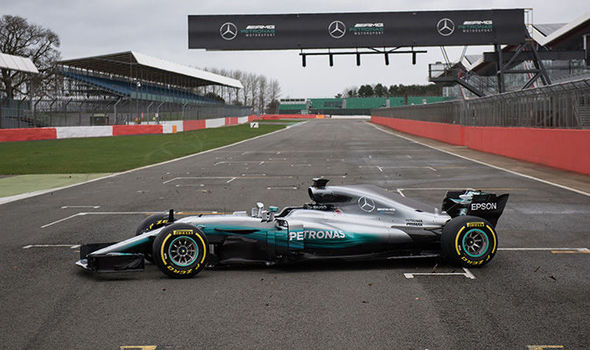 “I am not impressed with the whole thing and if you give me a chain saw I would take it off,” he said.

“We need to look after the driver safety but what we have implemented is aesthetically not appealing. we need to tackle that and come up with something that looks better. it is a massive weight on the car and you screw up the centre of gravity.”

Hamilton said he believed people inside and outside F1 would soon become used to the unusual looks and emphasised that it was a first attempt at improving safety for drivers’ heads.

“Honestly, the team have done great job to integrate it and make it look as nice as it can look. we have known for some time it was coming and I think after a few races we will forget it is even there.

“You often look at the old cars and think it’s dated. This is the new world right now and I’m sure it is only the first step of development.”