Syrian government forces have captured more than a third of rebel-held territory in eastern Aleppo.

The advance, after heavy bombing from the air, is a major blow for the armed opponents of President Bashar al-Assad.

Thousands of civilians have fled the besieged districts after a weekend of heavy fighting. Hundreds of families have been displaced.

What are the latest developments? 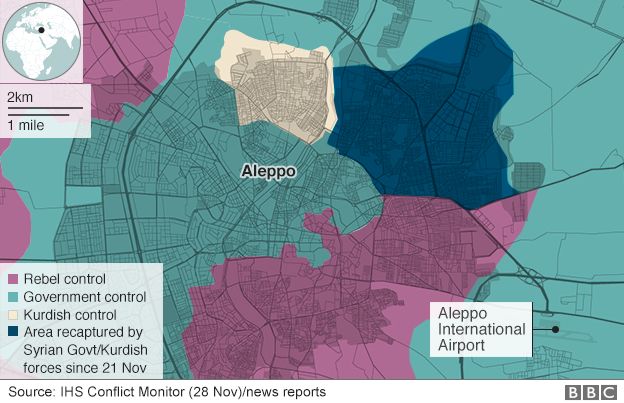 Rebel fighters have been driven out of more neighbourhoods of their long-held enclave in eastern Aleppo, as Syrian government forces continue to advance.

After further fighting on Monday, the rebels are reported to have lost all of the northern neighbourhoods they controlled before the weekend, leaving them with under two-thirds of the territory they had in the city.

Syrian government troops now control the section of east Aleppo north of the Sakhour highway, according to monitors.

Russia’s defence ministry says Syrian government troops have captured 12 districts, or 40% of the territory, from the rebels.

It says that more than 100 rebels have laid down their arms and left the city.

Aerial bombardment of rebel-held areas was continuing on Monday, according to the UK-based Syrian Observatory for Human Rights.

The Syrian army and its allies launched a major offensive to retake control of Aleppo in September.

What has happened to residents?

Thousands of residents of east Aleppo have fled to areas controlled by government forces and Kurdish groups since the fighting intensified on Saturday.

The Syrian Observatory for Human Rights said as many as 10,000 residents fled to government-controlled western areas and a Kurdish-run northern district. A spokesman for the Syrian Kurdish PYD party told Reuters that 6,000-10,000 people had fled into the district.

Scott Craig, the spokesperson for the United Nations High Commissioner for Refugees in Syria, told the BBC that there were 250,000 people in need of assistance in eastern Aleppo, 100,000 of them children. Food supplies were gone, he said.

“The situation on the ground in eastern Aleppo is almost beyond the imagination of those of us who are not there,” Mr Craig said.

Warning of a humanitarian disaster, a volunteer rescue service known as the White Helmets said it had run out of fuel reserves needed to reach people caught in the onslaught.

On Sunday, seven-year-old Bana Alabed, who has gathered thousands of Twitter followers with her tweets from Aleppo, said her home in the east of the city had been bombed. 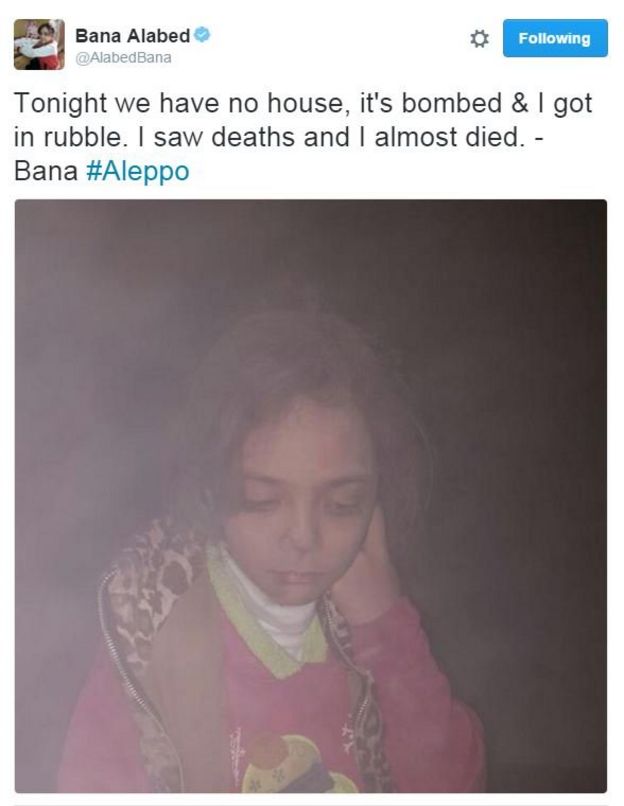 “Under heavy bombardments now. In between death and life now, please keep praying for us.”

Last week the United Nations’ humanitarian chief, Stephen O’Brien, said that hundreds of civilians had been killed or injured since the bombardment of eastern Aleppo resumed six days earlier.

He also highlighted deaths and injuries resulting from mortar and rocket attacks from rebel-held areas into western Aleppo.

Why has this happened now – and why does it matter?

This advance follows two weeks of relentless aerial bombardment, as the government and its allies renewed their assault on the rebel-held portion of Aleppo.

It followed a three-week pause in the Russian and Syrian bombing of the area, which ended on 15 November.

There are no fully-functioning hospitals left in the rebel-held territory and food ran out earlier in November.

Since the start of this month’s offensive, pro-government forces have conducted 2,000 airstrikes, bombing the city with some 7,000 artillery rounds as well as ballistic missiles, cluster munitions and chlorine gas, according to the White Helmets rescue group. The BBC has not been able to verify these figures.

Retaking the whole of Aleppo, Syria’s second largest city, is a key aim of the Syrian government. The east of Aleppo has been held by rebel factions opposed to President Bashar al-Assad for the past four years.

Government forces have taken more and more territory from them since Russia intervened to back its ally, President Assad, in September 2015.

Russia says its air force is active in other parts of the country, but has not operated over Aleppo since the pause.

The tide is clearly turning in Aleppo in favour of the Assad regime – raising serious questions about the ability of the disparate rebel groupings to maintain a significant area of control in northern Syria.

The recapture of the city would be an important symbolic achievement for President Assad – underlining the fact that despite all the calls for his departure, Russian and Iranian support has been able not just to maintain him in power, but has enabled the regime to go onto the offensive.

Indeed, external military support has been crucial. After years of gruelling attritional combat the regular Syrian army, despite new arms supplies from Moscow, is a shadow of its former self.

The battle for Aleppo has depended upon air power and a variety of pro-Iranian militias, including Hezbollah fighters on the ground.

This has cemented Iran’s key role in the conflict, which may have consequences in the future. 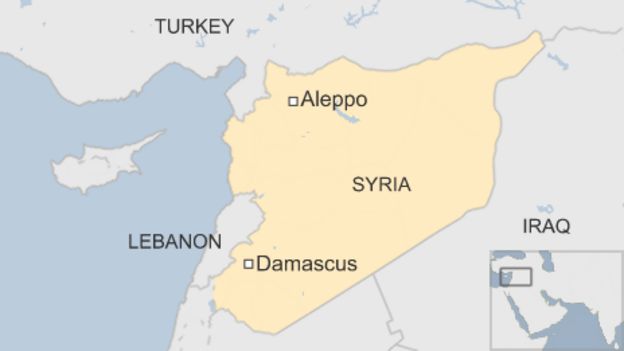