American Christian Coleman set a championship record as he claimed gold over 60m at the World Indoor Athletics Championships in Birmingham.

He saw off China’s Su Bingtian (6.42), with USA’s Ronnie Baker third (6.44), but Britain’s CJ Ujah was disqualified for a false start in the semi-finals.

“I felt good out of the blocks. I knew I had to just stand up, finish through and get it.”

Expectations of Coleman grew markedly when he took a world record which had stood for almost 20 years from USA’s former Olympic 100m champion Maurice Greene just two weeks before the championships.

He rose to global prominence at last year’s outdoor World Championships, claiming silver in both the 4x100m relay and notably in the men’s 100m, behind compatriot Justin Gatlin.

He told BBC Sport: “Nobody really remembers second and I’ve felt that twice. I used that as motivation and hopefully I come out with a few golds.”

‘All about foot speed’ – analysis

Coleman knew he had the ability and he was consistent. Repeat, repeat, repeat in the rounds, that’s what he has done. There were no real issues in the final. He just has that quickness. It’s all about foot speed for him.

Coleman’s smooth progress to the top of the podium contrasted the display of British medal hope Ujah.

The British champion won through to a semi-final where he was disqualified for moving from his blocks over a quarter of a second before the gun.

With a 6.53 second personal best this season, Ujah was thought to be carrying momentum into the event having won the British title at the same venue in February.

‘Don’t do something stupid’ – analysis

Earlier today I said CJ Ujah was in the right mindset. I said to him in the hotel lobby, “someone always does something stupid, make sure it’s not you”.

This was a semi-final where he wouldn’t have even had to run his best to get through. You just don’t take the chance. You sit there, react to the gun, don’t anticipate it and run.

But he was quickly disqualified for lane infringement along with Dominican sprinter Luguelín Santos, decisions which elevated Czech republic’s Pavel Maslak to the title for a third time.

The dismissal of Husillos and Santos added to a long list of athletes who have been disqualified over the three days for lane infringements.

“This needs to be looked at,” said BBC Sport analyst Michael Johnson. “You can’t continue to go this way where you have all of these disqualifications.”

The Frenchman held around a three second cushion going into the final 1,000m race, where his closest challenger – Canada’s Damian Warner – beat him by just over two and a half seconds. 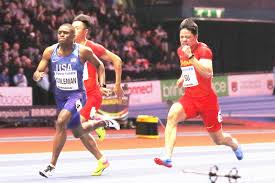 It was not enough, giving Mayer the world indoor heptathlon title to add to his world outdoor decathlon gold from 2017.

In one of the most anticipated races of the week, American Kendra Harrison set a championship record 7.70 seconds to claim 60m hurdles gold.

And Venezuela’s Yulimar Rojas proved another international favourite at Arena Birmingham, setting the best mark of 2018 to take the women’s triple jump with a 14.63m leap securing gold.